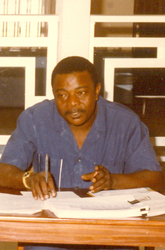 Dr. Jiya was the Onchocerciasis National Coordinator when national treatments were scaled up from 8.2 million in 1996, to 24.1 million treatments in 2008. It was during his tenure as the Director of Public Health that the country was mapped for river blindness. Also during his tenure, the national lymphatic filariasis (LF), onchocerciasis, schistosomiasis and trachoma programs became more focused and coordinated; and the NTD control program achieved a major milestone, interrupting LF in 5 Local Government Authorities in the states of Plateau and Nasarawa.

Dr. Jiya was one of the four people who conceived the initial idea of collaboration between the LF and malaria programs in Nigeria. This idea has been expanded and implemented nationwide, as evidenced by the recent launch of the LF/malaria co-implementation guidelines.