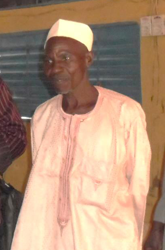 Sani Bokoye is a community drug distributor, a farmer by profession, a husband, and the father of 12 children. He lives in the village of Inkorégaou in the Maradi region of Niger, some 720 km from the capital city of Niamey. One evening in 2003, during his village’s first survey to collect data on lymphatic filariasis prevalence, Mr. Sani learned that hydrocele (scrotal swelling) is a complication of lymphatic filariasis (LF), and that the disease can be transmitted by mosquitos. Amazed by this information, Mr. Sani and the village chief, Sir Amdou, shared their new knowledge about the root cause of the disease throughout the community.

It was that evening when Mr. Sani first became personally invested in the fight against LF, neglected tropical diseases (NTDs) and mosquitos! When it was time to distribute the first round of LF treatment in his village, Mr. Sani was the first to volunteer to become a community drug distributor. Year after year, he has gladly promoted measures to help his community become free of NTDs, often allowing others to use his motorcycle to help mobilize communities in the surrounding villages to participate in mass treatment campaigns, and helping the local health center to organize surgical camps for hydrocele. His hard work has helped to significantly reduce the prevalence of LF in his community, and has helped put his district on the path to LF elimination.