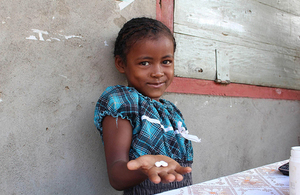 A young girl is given treatment to prevent Schistosomiasis, funded by by UK aid. Photo Credit: SCI

The UK announces a doubling of support to fight Neglected Tropical Diseases, such as trachoma, Guinea worm and river blindness, over the next 5 years. The UK will protect over 200 million people from the pain and disfigurement caused by treatable tropical diseases, International Development Secretary Priti Patel announced on April 16, 2017.

Britain is already leading the way in fighting these diseases, and will more than double its support over the next 5 years. This will mean a billion treatments for people at risk in the developing world as part of an international push to eliminate and eradicate these ailments for good.

Read the full press release on the GOV.UK website.