Lymphatic Filariasis (LF) is a parasitic disease transmitted to humans via mosquitoes. It is caused by chronic infection with tiny filarial worms that can damage a person’s lymphatic system. Infection is usually acquired in childhood; however, visible symptoms often do not appear until early adulthood.

Juvenile worms, transmitted by mosquitoes, develop into adult worms within an infected person’s lymphatic system: the complex network of nodes and vessels that maintain fluid balance between tissues and blood. Adult worms live on average from 5–7 years within the human host and produce thousands of offspring, called microfilariae. The microfilariae then circulate in the blood and, as they mature into adult worms, lodge in the lymphatic vessels, causing considerable damage to tissues in the body.

While the majority of infections do not show external signs, advanced stages of the disease can lead to lymphedema (tissue swelling), elephantiasis (skin/tissue thickening), and hydrocele (scrotal swelling). In those suffering from chronic lymphedema and elephantiasis, episodes of local inflammation can result from decreased function of the lymphatic system and increased limb susceptibility to bacterial infection. These painful episodes can be prevented with limb hygiene, skin care, exercise and elevation. Hydrocele can be corrected with surgery.

In 2000, WHO estimated that 120 million people are infected with the disease, and more than 1.3 billion people are at risk of infection worldwide. More than 40 million people suffer from lymphoedema (including elephantiasis) and hydrocele. The disease is concentrated in tropical and subtropical areas of the world, particularly Africa, India and Southeast Asia.

Lymphatic filariasis is one of the world’s most disabling and disfiguring diseases. It is most commonly found among poor and vulnerable populations, often in remote communities that lack access to basic health care. Besides the physical pain, people living with the disease can suffer tremendous social stigma. Disability and disfigurement from LF often prevent individuals from working, providing for their families, or being active members of their communities, resulting in mental and financial losses that contribute to the cycle of poverty.It is estimated that the disease results in US$ 1.3 billion in lost productivity every year.

USAID’s support for lymphatic filariasis elimination has resulted in an estimated 280.3 million people no longer at risk.

The strategy for interrupting transmission of lymphatic filariasis is annual mass drug administration (MDA) with a single co-administration of two drugs for at least five years. These two regimens are single doses of albendazole plus diethylcarbamazine or single doses of albendazole plus ivermectin in areas where onchocerciasis is also endemic. In special settings defined by WHO guidance, countries undergo alternative regimens of ivermectin, diethylcarbamazine, plus albendazole annually, or biannual albendazole.

The Agency has committed to global elimination of lymphatic filariasis as a public health problem and currently provides technical and financial assistance to countries in support of their efforts to eliminate the disease. The primary focus of Agency support is on scale-up of mass drug administration to achieve interruption of transmission of the disease and rigorous monitoring and evaluation of elimination progress. The Agency also provides support to countries to assist with morbidity management and disability prevention, with a focus on high-quality treatment and care to reduce suffering from chronic symptoms.

WHO Factsheet on Lymphatic Filariasis

Global Alliance for the Elimination of Lymphatic Filariasis website

Webinar: Assessing MDA coverage: Are We Getting the Coverage We Need? 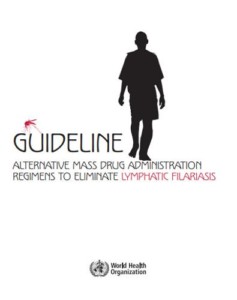