Schistosomiasis is one of the oldest recognized infections. Eggs of the parasite have been found in Egyptian mummies as old as 5,000 years, and evidence suggests that haematuria was recognized and treated as far back as 1550 B.C.

Schistosomiasis, or bilharzia, is a parasitic infection caused by any of several trematode worms (flukes) of the genus Schistosoma. There are five species that are known to infect humans: S. mansoni, S. intercalatum, S. haematobium, S. japonicum, and S. mekongi. In Africa, S. mansoni and S. haematobium are predominant throughout the continent, while S. intercalatum is found in certain areas of central and western Africa. S. mansoni is also found in Latin America and the Caribbean. S. japonicum and S. mekongi are mostly confined to Asia and the Pacific.

Adult schistosomes live in blood vessels draining either the bladder (S. haematobium) or the intestines (S.mansoni, S. japonicum, S. mekongi, or S. Intercalatum) where adult female worms produce eggs that are passed through urine or feces. When the eggs contact water, free swimming larvae, called miracidia, are released, and they infect freshwater snails. Once in the snail, the miracidia divide, eventually producing thousands of new infective parasites called cercariae, which are released into the water. These infective cercariae penetrate the skin of a human host where they find their way into blood vessels via the circulatory system, thereby starting the process over again. The recommended strategy for schistosomiasis is mass treatment with praziquantel, which effectively clears the body of worms, but reinfection is common due to the nature of the parasites transmission and human behavior.

Individuals become infected with schistosomiasis through contact with water contaminated with schistosome parasites while bathing, swimming, or performing daily chores, such as washing laundry, fetching water, and herding animals. Thus, patterns of sanitation, water supply, and human water use are crucial elements in determining the risk of infection.

Schistosomiasis infection is often acquired in childhood as children tend to spend more time playing or bathing in water containing the larval form of the parasite. Adults who work in or around water, such as fisherman, rice farmers, or car washers, are also more likely to become infected. Children are also at risk of greater morbidity and can suffer from poor growth and impaired cognitive development. The disease also contributes to malnutrition and disrupts school attendance. Long term, chronic infections can also lead to increased risk of HIV infection, certain types of cancer, and portal hypertension.

A total of 78 countries are reported to be endemic for schistosomiasis, but only 52 countries are at levels high enough to cause widespread morbidity and require mass treatment with praziquantel. The World Health Organization (WHO) estimates that there are nearly 260 million people living in areas where treatment is required. In 2007, Merck KGgA announced a donation of 25 million praziquantel (brand name Cesal©600) tablets annually through 2017. In 2011, that donation was increased to 250 million tablets for the medium term.

Learn more at the WHO Schistosomiasis page

Since the launch of the U.S. Agency for International Development (USAID) Neglected Tropical Diseases (NTD) Program in 2006, the global strategy for schistosomiasis has continued to evolve with new thresholds, targets, and diagnostic tools. At present, the USAID strategy is based on its original goal to prevent morbidity by providing at least 75 percent coverage of school aged children with 100 percent geographic coverage based on the World Health Assembly Resolution WHA54.19.

Bench Aids for the Diagnosis of Intestinal Parasites

Stats At a Glance 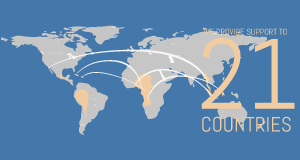