A Mighty Force: One woman sets her sights on the health of Filipino children

Home/A Mighty Force: One woman sets her sights on the health of Filipino children

A Mighty Force: One woman sets her sights on the health of Filipino children 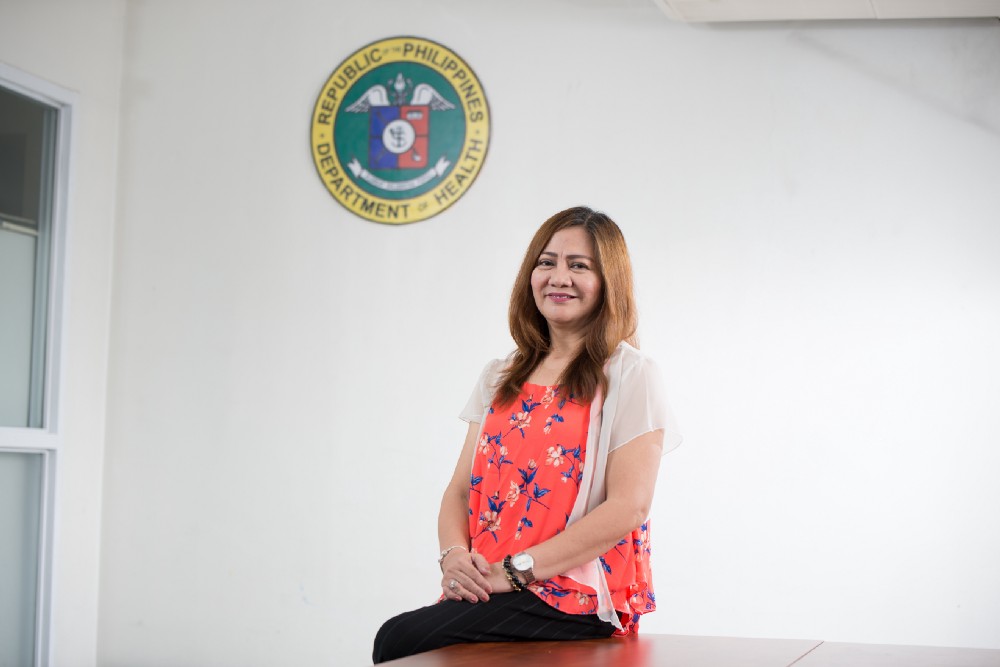 When Dr. Leda Hernandez began managing the Philippines’ lymphatic filariasis (LF) program more than 25 years ago, she was given just one piece of paper to work with: a prevalence survey from 1960 and reports of a “mysterious disease” coming from some districts.

Dr. Hernandez believed the reported symptoms to be those of LF, a parasitic disease spread by mosquitoes that causes thread-like worms to develop in a person’s lymph system. If left untreated, LF can lead to disability, stigma, and economic hardship.

“At first I did not know what to do,” she remembers. “But I collected my presence of mind and gathered all available data, including survey results and write ups.”

Dr. Hernandez then lobbied for a small amount of money from the Department of Health to convene health workers from the regions found to be endemic back in 1960, asking them to gather any additional regional data on LF that they could find.

“Sure enough, with these results and the data gathered, we had evidence that LF was not yet controlled and contained in the Philippines.” Armed with this data, Dr. Hernandez and her team made a case for national and local efforts to eliminate the disease.

Since then, Dr. Hernandez and her team have not only led successful efforts against LF — the country is on track to eliminate the disease — but she has also risen through the ranks of the Philippines Department of Health (DOH). In 2004, she began overseeing national efforts to fight neglected tropical diseases (NTDs) and malaria.

Fighting for the Health of Filipino Children

A trained medical doctor with a master’s degree in public health, Dr. Hernandez also set her sights on deworming efforts in children, channeling the determination and advocacy skills that were so successful in advancing progress on LF.

Known as intestinal worms or soil-transmitted helminthiases, these infections most heavily impact school-aged children and can hinder their cognitive and physical development.

The DOH leads the nationwide programs needed to support these deworming efforts. Partners like the U.S Agency for International Development (USAID) and donations from pharmaceutical companies GlaxoSmithKline and Johnson & Johnson have also supported the Philippines to reach their NTD goals and prepare for a sustainable response into the future.

Early research estimates revealed up to 67% of the population could be at-risk for these intestinal worms — with the greatest concern for the more than 40 million preschool and school-age children. To ensure the healthy development of Filipino children, the DOH has been procuring drugs and treating annually for more than a decade, carried out in schools and communities. In 2015, a survey showed the prevalence among children at only 28%, a sign of incredible progress to date and the importance of continuing these efforts.

Dr. Hernandez played a key role in this success. She encouraged DOH leadership to be strong advocates for NTDs, supporting them to champion the program with national and local leaders. She also personally testified in front of Parliament and advocated for creative ways to help fund the fight against NTDs, including the allocation of revenues from an excise tax levied by the Philippines government.

“I used advocacy to emphasize the benefits that mass deworming treatment has on vulnerable children across the country,” says Dr. Hernandez. “We used data to make this argument, disseminating the results of disease surveys and showing the health implications of this data on the populations impacted.”

Ultimately, under Dr. Hernandez’s leadership, the Philippines increased its domestic funding for deworming and today the program is fully funded through annual congressional budget appropriations.

Dr. Hernandez not only helped ensure the financial sustainability of the program, but also improved how the program was conducted. For instance, she played a key role in bringing the DOH together with the Department of Education, which started the program, to collaborate formally and effectively on deworming efforts. Now, the two departments work closely to coordinate treatment activities for school-age children both in and out of school, synchronizing the timing of treatment campaigns, providing joint training, and improving reporting forms and systems.

And in 2015, the DOH launched an annual National School Deworming campaign, a month-long effort for treatment that is widely promoted on radio and television. To ensure all children are reached with deworming treatment, many activities were initiated to increase buy-in at local levels, with an emphasis on educating parents on the importance of deworming.

Leadership for the Future

Dr. Hernandez and her team looked beyond a challenging start with a meager budget and outdated data towards a healthier future for Filipinos. It’s this forward-looking approach that has made their efforts so successful.

Dr. Hernandez is doing just that in her leadership of the LF program. As the program advances, it faces challenges in reaching some of the hardest to reach populations and geographies in the Philippines. Dr. Leda and her team continue to innovate and adapt their strategies to meet these at-risk populations, drawing on the support of research and collaborating partners.

The program continues to have an ambitious vision for the future: Over the next 5 years, the program aims to eliminate lymphatic filariasis as a public health problem and significantly reduce the burden of intestinal worms, specifically those that cause symptoms like diarrhea, abdominal pain, weakness and are more likely to lead to impaired development. That means a future in which Filipino children are able to grow, attend school, and eventually work free from these diseases. Dr. Hernandez and her team are also looking to the future to ensure that these health gains are sustained through strong monitoring and surveillance systems.

USAID’s Act to End NTDs | East program is supporting the Philippines on this journey, with a focus on capacity-building and sustainability, including support for the strengthening of an NTD regional laboratory network and the development of NTD curriculum modules for health professional training.

The road to this goal will not be easy, but Dr. Hernandez has cultivated a philosophy of leadership that will continue to guide her efforts and encourage and influence the next generation of NTD leaders.

Special thanks to Dr. Leda Hernandez for agreeing to be interviewed and share her story. Contributions from Laura Cane, Daryll Gutierrez, Angela Pereira, Nandini Pillai, Oknoy Poblete, and Alexis Serna.