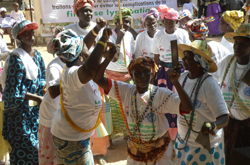 In 2013, the Neglected Tropical Diseases (NTDs) Control Program organized a mass treatment (MDA) campaign in the region of Sédhiou, targeting lymphatic filariasis and soil-transmitted helminths. Since it was the region’s first MDA campaign, it was important to find a way to raise awareness in the communities about the purpose of the campaign and the benefits of taking the medicine being administered, so that parents would allow their children to be treated.

For that reason, the regional health office of Sédhiou decided to partner with the Diamoral Folk Troop, a local group that uses traditional Senegalese songs and dances to educate communities about health issues. This is an especially effective awareness-raising method in Sédhiou, where song and dance are such an important part of the culture.

The troop composed songs in two local languages, Mandingue and Diola, about the dangers of lymphatic filariasis and soil-transmitted helminthes and the benefits of the drugs being distributed. At a social mobilization day held before the beginning of the MDA campaign, the troop performed these songs, accompanied by traditional dances, for an audience of local leaders, parents and school children throughout the region. Soon, the songs were being sung in schools and communities everywhere; and parents, children, and key stakeholders became well informed about NTDs and the benefits of the drugs that were about to be distributed.

Through traditional song and dance, the Diamoral Folk Troop found a culturally appropriate and extremely effective means of educating local communities about NTDs and the MDA campaign. Due in large part to the troop’s efforts, support for the campaign grew among traditional and religious leaders and among parents and children. The MDA campaign was a success and achieved all of its targets for the first year, and the Diamoral Folk Troop is now preparing for the 2014 campaign.

The national NTD Control Program had this to say: “The Diamoral Folk Troop played an important role in transmitting the key messages that we wanted to convey to communities. The involvement of this troop substantially contributed to the great success of the MDA campaign in Sédhiou with the achievement of significant coverage. We want to express our gratitude to the troop, and also to all the political, traditional and religious leaders in the region for their commitment to the fight against NTDs. We intend to build a lasting partnership with the Diamoral Folk Troop so that they can serve as an example throughout the region and in the rest of the country.”