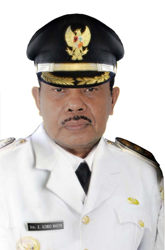 Once famous for its stronghold in the spice trade, Kota Tidore Kepulauan is a small island district in the province of North Maluku, Indonesia. This area of Indonesia is also famous for its national hero, Sultan Nuku, who was a key figure in Indonesia’s fight for independence. Today home to approximately 100,000 people, this small district is led by another hero who has dedicated his efforts to fight and eliminate neglected tropical diseases in his homeland. Dr. Achmad Mahifa, now in his 2nd term as mayor of this district, has remained committed to the fight against lymphatic filariasis, also known as elephantiasis, with the goal of eliminating it from the district by 2020.

Kota Tidore Kepulauan began distributing medicines to all residents, an activity called mass drug administration, for the prevention and elimination of elephantiasis in 2008. However, the residents soon stopped taking the medicines because of rumors of side effects. In 2011, the Indonesia Ministry of Health (MOH) conducted an advocacy meeting in Kota Tidore Kepulauan, supported by USAID through the NTD Control Project (now called Envision), managed by RTI. This meeting helped Dr. Mahifa understand the situation and work with district health officials to address the residents’ concerns. In 2011, the district restarted the mass treatment program and now, due to ongoing advocacy, the district has committed enough resources to fully fund the program. The district is achieving good treatment coverage, putting it on track to lower prevalence to levels enabling drug distribution to be stopped by 2016.

Mayor Achmad Mahifa remains strongly committed to all health issues in his home district of Kota Tidore Kepulauan. His agenda as mayor includes incentives to expand the skills of over 695 community health workers and to continue advocating for the control and elimination of some of Indonesia’s most neglected diseases.