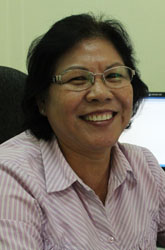 Helping to ensure that the most vulnerable children in Cambodia are no longer at risk for neglected tropical diseases (NTDs) is the major inspiration behind the dedicated career of Dr. Muth Sinuon, Head of the NTD Program of the National Center for Malaria Control, Parasitology, and Entomology (CNM) in Cambodia.

Born in 1956, she was able to finish high school before her life was dramatically changed during the Khmer Rouge regime. She married and had two children during this difficult time, but lost her husband and three siblings, and was unable to continue her education.

Dr. Sinuon didn’t give up hope and as the regime began to lose control, she doggedly pursued an Associates Degree in Medical Science at the University of Health Science, Cambodia, which she received in 1987. Upon graduation, she joined CNM. During her early years there, she would spend months in the field, working in collaboration with Medecins Sans Frontieres, the World Health Organization (WHO) and other donors, as well as with CNM colleagues and provincial health staff, to provide free health care for vulnerable people in the most isolated and underdeveloped areas of the country, many still under the control of the Khmer Rouge.

Although originally banned by Khmer Rouge soldiers from providing free medical services, they could not stop her for long. With her typical strong determination and clear focus, she managed to convince the soldiers to allow her to care for the children. “During my field work, I witnessed a young child with an NTD infection vomiting up blood. Since then, I have dedicated my career to saving these children and trying my best to ensure each a long and happy life without worms,” Dr. Sinuon said.

Seeing the abundant and real needs in the field, Dr. Sinuon continued pursuing her education, first in Malaysia, where she received a Diploma in Parasitology and Entomology in 1997, and then in Switzerland, where she received a Diploma Degree in Management in Tropical Countries in 1999. In 2002, she completed a Doctoral Degree at the University of Social Sciences in Cambodia; and in 2008, she completed her educational career with a Masters degree in Parasitology from the London School of Hygiene and Tropical Medicine in the UK.

Under her management, the NTD control and elimination program has moved from strength to strength. Beginning in 1996, she pioneered research on schistosomiasis in the country and confirmed the distribution of the parasites in four provinces, where an estimated 82,000 people were at risk. Following annual mass treatment throughout those provinces, the prevalence of that disease fell to well below the WHO standard of a public health problem.

In 2000, lymphatic filariasis (LF) was found in the country and Dr. Sinuon started working with key partners to map the areas where transmission was occurring, and to organize annual mass treatment in those communities. By 2010, CNM was able to stop mass treatment and institute surveillance to verify that transmission was no longer taking place. Further surveillance must be done before CNM can officially, through WHO, document the absence of LF, which it hopes to do in 2015.

CNM also currently provides semi-annual mass drug administration for soil-transmitted helminthes to approximately 3.5 million pre-school and school-aged children; reaching on average between 90% and 97.9% of all children throughout the country. By working closely with the School Health Department of the Ministry of Education, Youth and Sport, Dr. Sinuon and her team have been able to strengthen STH control efforts across the country, while placing equal emphasis on providing treatment and teaching healthy behaviors in the classroom.