In 2007, Niger set about building systems and policies to ensure that NTD drug treatments are securely stored, managed, and delivered to populations in need. These efforts have met with success – earlier this year, millions of Nigeriens received needed NTD treatments.

Niger secured its drugs through two main mechanisms. First, the Minister of Health, His Honorable Mr. Issa Lamine, established a Drug Security Management Committee responsible for ensuring that all donated drugs to Niger are managed according to international standards, stored in secure storage facilities, and accounted for throughout the drug distribution process. Second, the NTD Control Program coordinator, Dr. Amadou Garba, worked with the Niger Red Cross to obtain use of its massive storage facility in Niamey. The in-kind donation from the Red Cross has ensured that all the donated NTD drugs are stored in a secure location overseen by both the Red Cross and the Niger NTD Control Program. 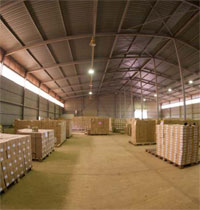 Red Cross storage facility where the NTD drugs were stored prior to the mass treatment campaign
Source: SCI

With these systems and this facility in place, in May and June of 2008, Niger’s NTD Control Program conducted its second integrated mass treatment campaign to combat five common NTDs: lymphatic filariasis, schistosomiasis, onchocerciasis, soil-transmitted helminthiasis, and trachoma. The campaign was conducted in four priority regions and targeted approximately 8 million people. It was funded through USAID’s NTD Control Program and the Schistosomiasis Control Initiative (SCI), with drug donations from the GlaxoSmithKline, Merck, and Pfizer pharmaceutical companies and partners such as SCI, USAID, and UNICEF. Millions of treatments were donated at a value of more than $62 million.