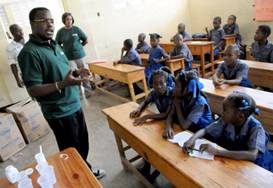 IMA’s Dr. Abdel Direny talks to children in Jacmel during the June MDA, explaining the importance of the medicines and of practicing good hygiene. 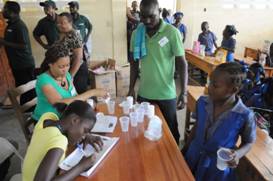 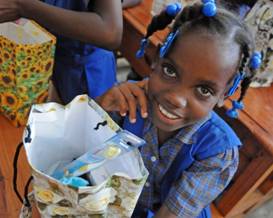 A young girl inspects the contents of her Healthy Kids Kit during the June MDA. 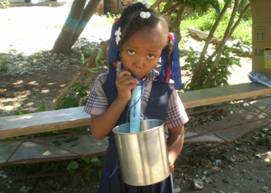 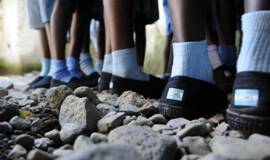 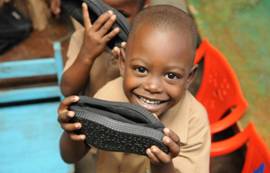 Children show off their new TOMS shoes, which they received from IMA during a January 2011 distribution that complemented the efforts of the NTD program.
Source for all photos: IMA World Health

When Haiti’s 7.0-magnitude earthquake devastated Port-au- Prince and surrounding areas on January 12, 2010, more than 230,000 people died, more than 1 million were displaced in Port-au-Prince, and almost 3 million people were directly affected. Development programs that had been helping to improve many aspects of life in Haiti before the earthquake, such as in health care and infrastructure, also suffered tremendous setbacks, as the earthquake destroyed progress and suspended program activities.

After the earthquake, all activity for the Neglected Tropical Disease Control Program in Haiti halted for several months. This program has been critical to the prevention of debilitating neglected tropical diseases (NTDs), including lymphatic filariasis (elephantiasis) and soil-transmitted helminthiasis (intestinal worms), among millions of people in Haiti. IMA World Health leads in the implementation of USAID-supported activities, providing medication to millions of Haitians through mass drug administration (MDA).

In early February, just weeks after the earthquake, IMA conducted discussions with central, departmental, and communal levels of the Ministry of Health (MSPP) and Ministry of Education. It was concluded that planning for MDA should move forward to continue providing this valuable treatment to the population.

In April, three months after the earthquake, the first MDA took place in Cap Haitian, treating 271,327 people. Building on this success, all the previously scheduled USAID-funded NTD program activities were reprogrammed and completed by June 2010. The total number of persons treated in April and June was 1,294,312 – an approximate 92 percent coverage rate!

To target other health issues exacerbated by post-earthquake conditions, IMA was inspired to use the June 2010 MDA as a platform to deliver 2,000 Healthy Kids Kits – packed with essential hygiene items to encourage frequent hand and face washing and to keep disease at bay – to school children in Jacmel.

In September 2010, all Haiti NTD partners met at IMA’s headquarters in New Windsor, Maryland, for a partner meeting. This meeting was scheduled to follow up the previous one in Haiti, which had taken place the week of the earthquake in January. This follow-up meeting was a time to plan for the future and reflect on the hardships, challenges, and successes of the preceding months.

Harsh weather in the form of tornados and tropical storms swept through Haiti this fall, causing additional damage, flooding, and fatalities in the still-recovering nation – deepening the risk of widespread disease. At the same time, a deadly cholera epidemic hit Haiti in October 2010, leading the MSPP to halt all NTD program activities once again. Though NTD work stopped, IMA staff responded to the cholera outbreak by providing essential drugs and supplies to partner health facilities. Through existing relationships with schools that participate in MDA, IMA was also able to distribute LifeStraws to children who lack access to clean drinking water.

In November, the results of the presidential election were announced and, calling it fraudulent, protestors in Port-au-Prince resorted to violence – bringing additional tumult and uncertainty to the country. To date, no new president has been named.

In January 2011, one year after the quake, MDA resumed in Haiti after its second hiatus in the past 12 months. Despite the setbacks from harsh weather, disease outbreak, and violence in the preceding months, IMA anticipates treating more than 270,000 people in the first MDA. To complement the efforts of the NTD program, IMA has partnered with TOMS shoes to distribute 800,000 pairs of new shoes to Haitian children this year.

Due to additional funding from the U.S. Centers for Disease Control and Prevention (CDC), a Port-au-Prince MDA is currently being planned by MSPP and NTD program partner University of Notre Dame for spring 2011.

All of these NTD activities could not be done without the vast network of community volunteers throughout the country. This year, IMA will organize and train 18,682 community leaders, promoters, and drug distributors who will promote and oversee the program across the country. Thanks to these volunteers and IMA’s six committed and hard-working local staff, 4.3 million people will receive MDA through the USAID-funded portion of the program this year.

The NTD program is scheduled to achieve full national coverage in Haiti in 2011.

By combining funds from USAID, support from local ministries, contributions and collaboration from international partners, and involvement of community members, the NTD program in Haiti has proven to be a model for a successful development program in action. Not only has the program been able to respond quickly and resourcefully to many unexpected challenges in the past year, but it has also been able to bring additional value and benefit to the population it serves.