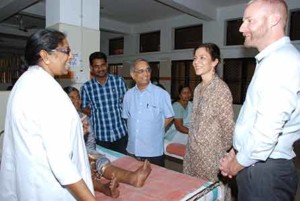 Dr.Kumaraswami in the center with USAID and Task Force for Global Health colleagues, at a recent visit to the Filariasis Chemotherapy Unit, TD Medical College, Kerala,India,in February 2016.

The U.S. Agency for International Development (USAID) Neglected Tropical Diseases (NTD) family expresses our deepest condolences at the news of the passing of Dr. V. Kumaraswami, his wife, and mother this weekend in Vellore, India.

Dr. Kumaraswami influenced so much and meant a lot to so many in the NTD community, from the young students he mentored to leading researchers in the global NTD arena. He no doubt made a huge impact on the poorest and most vulnerable populations, particularly those suffering from lymphatic filariasis. Throughout his career at the Indian Council of Medical Research and later with the Task Force for Global Health, Dr. Kumaraswami – “VK” to those who knew him best – was a champion for NTDs, and his calm, somber, yet razor sharp presence will be deeply missed. We join with the global NTD family in mourning this tragic loss. “Dr. Kumaraswami’s presence in the room was felt; a quiet giant in the NTD field and a savvy scientist who really helped groom so many future generations and alleviate the suffering of many more. His sincere smile, wisdom and mentorship will sorely be missed,” said Joseph Shott, USAID NTD Program.