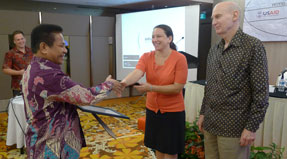 Indonesia honored two unsung heroes as part of the USAID One Billion Celebration during their 2014 Stakeholders’ Meeting held in Jakarta, Indonesia on August 11, 2014. The meeting included a number of partners and stakeholders including USAID, RTI International, WHO, EISAI, MoH, MoEd, and MoEn. Mr. John Rogosch (USAID/Indonesia) and Marci Van Dyke (USAID/Indonesia) presented awards to the two selected heroes in an effort to recognize the giant contributions that these two people have made to Indonesia’s fight to eliminate/control NTDs.

The two heroes includes Ibu Yulisnawati from Lingga Subdistrict and Dr. Ahmad Mahifa from Kota Tidore District, both of whom have continually worked and advocated for NTD activities in their districts. Their commitment to the fight against NTDs has set an example for all districts in Indonesia. RTI, alongside USAID and the MoH in Indonesia were happy to honor their efforts and encourage them to continue the fight in their districts.