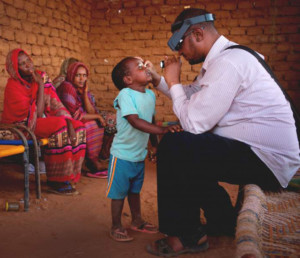 Anwar is examined by a doctor from Sightsavers. Kate Holt, Sightsavers

Anwar* is a 3-and-a-half-year-old Sudanese boy who last year was diagnosed as having the early stages of trachoma, a bacterial eye infection that, when left untreated, can lead to blindness. He is one of 2.6 million people who were screened by one of 550 trained field teams working in 29 countries over a three-year period to carry out the largest infectious disease survey ever undertaken.

“This colossal effort could not have happened without the steadfast commitment and collaboration of over 60 partners working together around the world,” explains Angela Weaver, senior technical adviser for USAID’s Neglected Tropical Disease (NTD) Program and the Agency’s lead for trachoma elimination. “Mapping has been at the foundation of USAID’s NTD Program since it began 10 years ago. We must understand where treatment is needed before scaling up NTD programs. This is why we joined DFID, the U.K. Department for International Development, in supporting this unprecedented global survey.”

Preschool-aged children like Anwar, who often live in extreme poverty, are most at risk of contracting Chlamydia trachomatis, a bacterium that spreads through eye and nose discharge, hand contact and flies. With repeated episodes of infections over many years, it causes the eyelashes to turn inward, scraping the cornea, causing great pain and eventually leading to blindness. Anwar’s condition was detected in time and the worst was averted.