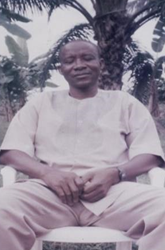 Mr. Alhassan Ahmed joined the World Health Organization’s Onchocerciasis Control Programme (OCP) in 1995, when spraying insecticides by aircraft was the main disease control strategy. Based at the district level of the health system, he is one of the Programme’s longest-serving technical officers.

Mr. Ahmed first joined the Programme as a field technician. He received on-the-job training and learned to perform skin biopsies, known as skin snipping; use microscopic equipment for epidemiological surveys; and catch, dissect and preserve flies (the disease vectors) for DNA molecular analysis.

He later attended the Rural Health Training School of the Ministry of Health, and upon finishing his training he became a technical officer for disease control. Returning to work at the district level, Mr. Ahmed continued providing technical support to the Neglected Tropical Disease Programme (which subsequently subsumed the OCP) at the community, district and national levels, a job he continues doing to this day.

In his work on NTDs, Mr. Ahmed has performed the following key activities:

Mr. Ahmed has performed these roles with distinction and dedication for almost 20 years, and he continues to offer enormous support to the NTD Programme in all capacities at the district level.