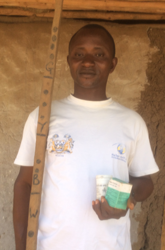 Mohamed Abu Jina is a teacher at the Mogbando community school in the district of Port Loko in Sierra Leone. About 9 years ago, he was transferred to the village of Mogbando, where he married and has since resided. A dedicated teacher, he was selected as a community drug distributor (CDD) by the community elders in 2007. Since then, he has served his people diligently.

Mohamed was chosen as a neglected tropical diseases (NTD) hero because of his dedication to distributing NTD drugs to the people of Mogbando, despite not originating from the area. “I feel very humbled and honored to be appointed as a CDD in this community; it is my second home and I will continue to volunteer my service until we eliminate these dreadful diseases,” he says. Mohamed has established himself in his “new home” and can speak the local language fluently. Prior to each mass treatment (MDA), he conducts awareness-raising meetings in the community to inform the population about the upcoming campaign. Over the years, Mohamed has received a series of trainings and refresher trainings from the NTD program, which have equipped him with robust knowledge of NTDs, enabling him to share complete and accurate information with his community.

Mohamed leverages his status as a teacher in the community to mobilize students to take NTD treatments and to encourage them to speak with their parents about doing so, as well. He also demonstrates his belief in the NTD program by being the first to participate in every MDA. “As a way of confidence-building among the community members, I am always the first person to take the NTD drugs at the start of an MDA, and I do so openly,” Mohamed confided. Strategies such as these have made him an effective ambassador of the NTD program, ensuring ongoing high MDA coverage in Mogbando.