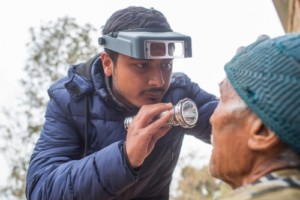 A health worker inspects a patient’s eyes with a flashlight

USAID’s commitment to the fight against trachoma in both Ghana and Nepal goes back almost a decade. In Ghana, through the END in Africa project implemented by FHI 360, USAID supported disease mapping, the delivery of 1.1 million treatments through mass drug administration, and impact evaluations in 37 endemic districts. The Government of Ghana trained ophthalmic surgical nurses and incorporated screening and treatment of neglected tropical diseases into the larger health system.

In Nepal, USAID and partner RTI supported the government with disease mapping, the delivery of more than 2.4 million treatments, impact surveys in 20 districts, and assisted with the development of a trachoma elimination dossier, the application submitted to the World Health Organization that captures a country’s historic fight against the disease.

Donors and national governments alone could not have achieved this remarkable milestone without the support of the private sector. The pharmaceutical company Pfizer Inc. donated azithromycin, one of the most-effective drugs available to prevent and treat trachoma.

Collectively, 3.5 million treatments were delivered to communities at risk in both countries. The World Health Organization’s recent announcements mark the first USAID-supported countries to achieve this milestone that significantly utilized the Pfizer donation and is a moment of celebration of a highly effective government-led, private-to-public, and people-to-people partnership.