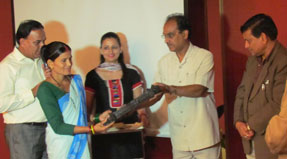 Unsung heroes, Apsara Khati and Bandhya Chaudary, Female Community Health Volunteers with representaitves of the Ministry of Health in Nepal.

As a partner of the U.S. Agency for International Development’s (USAID’s) Neglected Tropical Diseases (NTD) Program, the Government of Nepal joined the global community to celebrate USAID’s landmark achievement in supporting 1 billion treatments for NTDs in 2014. During the event, health experts highlighted the successes in control and elimination of three neglected tropical diseases in Nepal – blinding trachoma, lymphatic filariasis (LF) and soil-transmitted helminthes (STH) – during a program organized by the Ministry of Health and Population (MOHP) in Kathmandu.

Nepal’s female community health volunteers (FCHVs) were also recognized as “unsung heroes” for their significant contributions in the national mass drug administration campaign against LF, STH and trachoma elimination and control programs. Ms. Bandhya Chaudhary of Dang and Ms.Apsara Khati of Kailali received certificates on behalf of all FCHVs. MOHP Secretary Dr. Tirtha Raj Burlakoti and Director General, Department of Health Services, Dr. Sainendra Upreti jointly congratulated them and thanked them for their dedication to improving the health and welfare of the Nepali people.

USAID and the ENVISION project, led by RTI International, has worked with the Government of Nepal to outline an integrated NTD national plan of action. This plan is carried out by the MOHP and Ministry of Education in collaboration with the World Health Organization, RTI International, the Centre for Neglected Tropical Diseases at the Liverpool School of Tropical Medicine, GlaxosmithKline, Pfizer and others.

“With the help of USAID and the ENVISION project, Nepal has documented the burden of disease throughout the country and is now working to successfully implement disease control and elimination programs across the country.” Dr. Padam Bahadur Chand, MOHP Chief of Policy, Planning and International Cooperation Division.

Dr. Babu Ram Marasini, the Director of the MOHP’s Epidemiology and Disease and Control Division, presented the successes of the LF program. In 2014, the program reached 100 percent of endemic districts with treatment and aims to eliminate LF in Nepal by 2018. Mr. Basant Adhikari, Senior Public Health Administrator of the Child Health Division stressed the need to also focus on control and prevention of STH to reduce anemia among women of reproductive age and children. “Simple interventions such as periodic deworming [through NTD drug distributions] can prevent hundreds of Nepali children dying from malnutrition,” he said.

Nepal’s trachoma program has been quite effective in bringing down the burden of blinding trachoma disease to near elimination level. Mr. Sailesh Mishra, Program Director for the National Trachoma Control Program, explained that they are working to eliminate blinding trachoma in Nepal by 2017.

Finally, Dr. Nastu Sharma, Resident Program Advisor for RTI International, talked about the role of USAID support in helping Nepal reach every at-risk community through an annual mass treatment campaign. In addition to support for mass drug administration and program monitoring, efforts are under way to strengthen capacity and support for health workers, notably FCHVs, who are so critical to the success of NTD programs in Nepal.