Now in Sight: Success Against an Infection That Blinds

Home/Now in Sight: Success Against an Infection That Blinds

Now in Sight: Success Against an Infection That Blinds 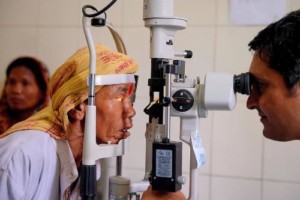 Shiva Lal Rana, left, getting a checkup at the Geta Eye Hospital in Nepal. Photo credit: Poras Chaudhary for The New York Times

GETA, Nepal — Fifteen years ago, Shiva Lal Rana walked 20 miles to Geta Eye Hospital to ask doctors to pluck out all his eyelashes. Trachoma, a bacterial infection, had swollen and inverted his eyelids. With every blink, his lashes raked his corneas.

“The scratching hurt my eyes so much I could barely go out in the sun to plow,” he said. “I was always rubbing them.”

Worse, he feared the fate that others with the infection had suffered. The tiny scratches could accumulate and ultimately blind him. Instead, doctors performed what was then a new operation: They sliced open his eyelids, rolled them back and sutured them with the lashes facing outward again. And they gave him antibiotics to clear up the infection.

“My vision is much better now,” said Mr. Rana, a tiny, lively man who guessed he was about 65. “I can recognize people. I can work.”

His personal triumph parallels his nation’s. In May, the World Health Organization declared that Nepal had eliminated trachoma as a public health problem, making it the sixth country to do so. In June, Ghana became the seventh.

Those successes, experts say, show the wisdom of advocating and enforcing basic public health practices, rather than waiting for a miracle cure or a new vaccine. They are also a testament to the unheralded but steady generosity of Americans. Much of the progress was made through donations by an American drug company, American foundations and American taxpayers.