Photo Gallery Launch at the American Cultural Center, Maputo, Mozambique, in Recognition of USAID’s One Billion and Counting Campaign

Home/Photo Gallery Launch at the American Cultural Center, Maputo, Mozambique, in Recognition of USAID’s One Billion and Counting Campaign

Photo Gallery Launch at the American Cultural Center, Maputo, Mozambique, in Recognition of USAID’s One Billion and Counting Campaign 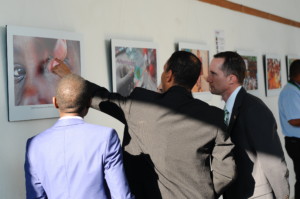 August 7, 2014 – A photo gallery was launched in recognition of USAID’s One Billion and Counting Campaign: Accelerating Action to Eliminate Neglected Tropical Diseases (NTDs) at the American Cultural Center in Maputo, Mozambique. The photos highlight the many efforts around the world to control and eliminate NTDs, including activities in Mozambique, supported by USAID’s ENVISION project. The event was successful in raising awareness for NTDs, combining the use of powerful images, with speeches addressing the reality of the NTD situation in Mozambique and support provided by USAID for the control and elimination of these diseases.

Dr. Francisco Mbofana, Director of Public Health, Ministry of Health (MISAU) in Mozambique, highlighted the need to look for solutions instead of just focusing on existing problems. Philip Downs, NTD Technical Advisor, RTI International, said that we still have a long way to go, but every milestone is a step in the right direction. Acting Ambassador to the US Mission Mark Cassarye said he was grateful for the work being done in Mozambique and that we need to keep moving forward.

A cultural performance group called Kuphaluxa demonstrated how individuals can help their communities by helping their elders understand a bit better what NTDs are and that they should seek medical care if they think they have any of the symptoms. They performed a moving theater piece, which was accompanied by music incorporating some key messages in their work.

Background: USAID assistance for NTD control and elimination in Mozambique is provided through the ENVISION project, led by RTI International. Since starting work with the MISAU and the National Trachoma Program in 2012, ENVISION assistance has helped Mozambique to document the burden of trachoma in the country, a critical step in understanding the extent of the problem and planning for program activities.

Mozambique began treatment for trachoma in Niassa Province for the first time in 2013 and expanded the program into Cabo Delgado Province in 2014. Over 473,000 people have been treated with Zithromax and tetracycline eye ointment. This year, the ENVISION project will support mass treatments for trachoma for over 1.8 million people in 18 districts. Mozambique is committed to eliminating trachoma by the year 2020.