Home/Q&A: How We Are Working to Rid Mozambique of a Blinding Disease 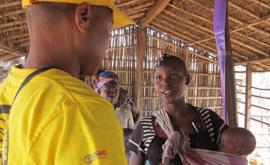 A community drug distributor provides a young mother with the appropriate dose of the trachoma-fighting drug Zithromax as part of a mass drug administration in Mozambique. / RTI International

USAID has supported Mozambique’s government to fight trachoma since 2012. Thanks to the efforts over the past year of the ENVISION project, a collaboration between Mozambique’s Ministry of Health, USAID and other international partners, 1 million people in Mozambique are no longer at risk of contracting the eye infection.

The goal of the project is to eliminate the blinding disease within Mozambique’s borders by 2020.

With such an ambitious timeline, the manager of the project Sharone Backers discusses progress, challenges, partnerships, and what work is left.