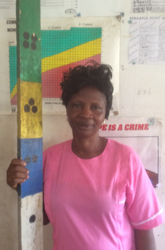 Rosaline has worked with the Neglected Tropical Diseases (NTD) Program since it was the National Onchocerciasis Control Program. She witnessed the Program’s transformation as it became the national NTD program and expanded its mission to control or eliminate four targeted NTDs in Sierra Leone, including onchocerciasis, lymphatic filariasis, schistosomiasis and soil-transmitted helminthes.

Rosaline was chosen as an NTD hero because of her strong dedication and excellent performance in implementing NTD activities. As a woman and trained MCH-aide, Rosaline works very closely with the women in the communities she serves. Accordingly, she has helped communities become better informed about mass treatment (MDA) campaigns and their impact on diseases; and she has helped to dissuade common misconceptions that had been barriers to participation in treatments. “I feel very happy because women now take the lead on taking NTD drugs; and they even encourage their husband and children to do so,” Rosaline says. “This positive behavior in women has drastically increased drug compliance in all my catchment villages over the past three years.”

Rosaline has also successfully reduced attrition among community drug distributors in her catchment area by nominating them as community health workers during polio vaccination campaigns and maternal child health weeks. Her communities have achieved high drug coverage; and district records show that Rosaline is an effective supervisor and that she maintains good records systems.

“I am also personally happy because these drugs have helped to improve the sight of a lot of people in this community; and they are provided free of cost by foreigners, so it is my obligation as a citizen to make sure the drugs reach the target beneficiaries,” Rosaline says.

Rosaline has worked with the Ministry of Health and Sanitation for over 30 years. She is married, has five children and lives with her husband.