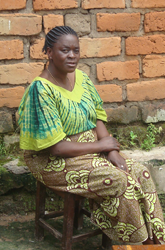 Teddy Chambala is a forty-eight year-old single mother. Her eldest son is 22 and the younger one is a 17-year-old secondary school student who plans to take his final examination this year. Teddy lives in Namanyere township, NKasi district in the Rukwa region of southwestern Tanzania. She has few opportunities for income, yet she has been a committed community drug distributor (CDD) for the Neglected Tropical Diseases (NTD) Control Program for the last three years.

In 2011, Teddy was selected in a village public meeting to become an NTD CDD of her hamlet. She has received training to increase her understanding of the NTD program and the various diseases targeted, as well as other health problems related to these neglected diseases. The training has given her the skills to administer the correct dosage of the NTD drugs, which involves measuring height using a specially calibrated pole. She can now conduct a census, register households, and provide health education to families in her community, helping them to understand the importance of taking the NTD treatment drugs.

According to Teddy, “Before this program, we had a big problem with helminthes in this area. But in the past three years, the problem has gone way down.” She quickly adds, “There are things I did not know before this program, but do now. For example in our community, people believed that trachoma was an inherited disease; that if your parents or grandparents had suffered from it, then you would suffer from it, as well. Now I know it is not, one gets it from germs; and it can be prevented and treated.”

Teddy is one of the many people who have agreed to volunteer, despite other family commitments, to serve members of the community, visiting them in their households and providing education and treatment during the annual mass drug distribution campaign. Nkasi district, where Teddy lives, is one of the 54 districts getting USAID support for the prevention and treatment of NTDs in Tanzania.