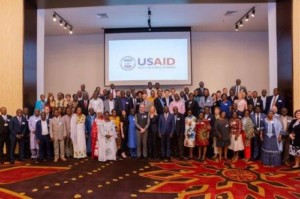 The U.S. Agency for International Development (USAID), in collaboration with 11 ministries of health, launched a program to eliminate or control five neglected tropical diseases in sub-Saharan West Africa. The five-year, $200 million program is the successor to the Agency’s END in Africa project, which worked since 2010 to eliminate debilitating diseases such as lymphatic filariasis and trachoma, and to control onchocerciasis, schistosomiasis and three soil-transmitted helminths.

The Agency launched the new Control and Elimination Program for Neglected Tropical Diseases, Element One program and closed the END in Africa project at a meeting at the Kempinski Hotel Gold Coast City in Accra, Ghana, November 14–15, 2018.

Learn more from the U.S. Embassy in Ghana.