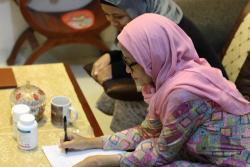 This is Wita, since 2013, she has worked as a monitoring & evaluation specialist with ENVISION, a USAID project led by RTI International that aims to control and eliminate NTDs in Indonesia and 18 other countries.

One rainy Saturday evening in 2014, Wita Larasati and her husband ventured to their local mosque. They were answering their mayor’s personal call for all eligible residents to take treatment for lymphatic filariasis (LF), a painful and disfiguring parasitic infection. At the mosque, health workers asked the couple to complete a registry form and read an informational brochure before taking the pills.

Wita lives in Depok City, a city of almost 2 million people that lies south of Indonesia’s capital city, Jakarta. Like 82 million other Indonesians, Depok residents are at risk of contracting LF, even though the disease can be eliminated in an area after five rounds of preventative treatment among all eligible residents. The mayor’s personal appeal aimed to increase the number of people who received LF treatment – and ultimately to eliminate the disease from the city.